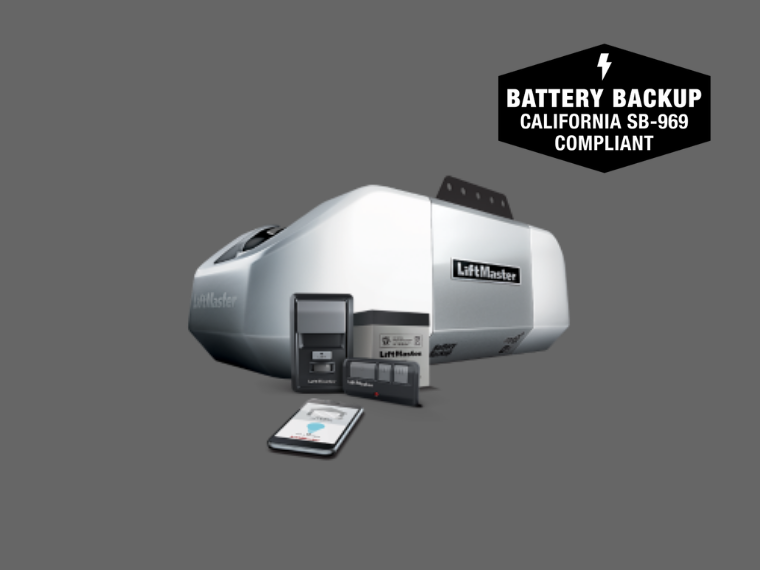 As you’re looking at getting a new garage door opener, you’ll see that most of them come with some kind of garage door opener battery. Of course, that’s a handy feature, but is it something that you need to get? If you’re living in California, it’s actually something that’s required by law. Let’s look at why this is, and how battery backup can help you.

In this article, ew’re taking a closer look at what a garage door opener battery is and the advantages it offers homeowners.

A Garage Door Opener Battery is Required by Law

The law for battery backups for garage door openers dates back to 2017, when the state of California was ravaged by wildfires. This caused serious amounts of damage, and that included the destruction of power lines. Thanks to this, many homes lost power.

When homeowners needed to escape their homes, they often tried to get out through their garages. When they came to open the garage door though, they couldn’t as the power was cut, so electric powered garage door openers couldn’t function.

Some were able to bypass this by opening the door manually, but that wasn’t an option for some homeowners. There were at least five people who were found dead, as they couldn’t escape through the garage door. They were mostly elderly people, and the assumption is they didn’t have the physical strength to get the door open and get out. This number would have been higher, but others were saved after their neighbors saw they were struggling to get out, and assisted.

After this wildfire, it was seen that two million homes in California are at risk of wildfire, out of the 4.5 million overall in the US. Because of this, a state senate bill was introduced, to require all garage door openers to have a battery backup. This was Senate Bill 969, which was introduced by Bill Dodd. Dodd was actually involved in the wildfires, finding he couldn’t open his own garage door when they cut power to his home.

The bill was highly supported and then was signed into legislature in September 2018. Now, when you install a new garage door opener, you’ll need to use one that has battery backup by law.

Now, all manufacturers and garage door fitters know that all garage door openers must have a battery backup. Making, selling or fitting an opener that doesn’t have one is punishable by a $1,000 fine per violation. There’s also a $500 fine for any garage door that opener that’s installed and operational, but doesn’t have backup power.

So as you’ve seen, you’re going to need a battery backup for your garage door opener. Even without legislature, they’re still highly useful to you as a homeowner. Here are some befits of having them installed:

A safety feature everyone can use: In the past, if the power went out you could simply open the garage door manually. However, that’s not something everybody can do. Elderly people, children, and people with disabilities may all find it difficult to do so.

If there’s a battery backup, there’s no need to worry. Instead, you can simply use the garage door opener as usual. The garage door will open, and you’ll be able to get out.

Perfect for routine power outages: While the battery is mostly in place to provide an escape route in emergencies, it also offers other advantages. If you have a regular power outage in your area, you won’t be stuck having to open the garage door manually when you get home. Instead, you just use the opener as usual and make your way in or out of the garage. It offers a lot more convenience to you if the power does go out.

You can visually monitor your battery backup: One of the best things about battery backup is that you can keep an eye on them, and ensure they’re working as intended. Most batteries will have a light system, to show you how much battery is left. Once there is a red light showing, it’s time to change the battery out. It is recommended that you change the battery every two years, to ensure that it will be in full working order when you need it.

Your battery backup will need to be maintained, as part of your garage maintenance checklist. It’s very easy to test it and see if its working. Simple unplug the garage door opener from the mains and then attempt to use it using battery power. If it works as it should, then you should be good to go. Check the lights on the battery to see how much power you have left, and make sure you’re replacing that battery every two years.

Also, remember that you shouldn’t use the battery power as default. It’s designed for short-term use, so keep your garage door opener plugged in.

When buying a new garage door opener, there are several things you need to consider. One of the first and most important things is that it has backup battery power. Make this your priority when you’re looking around.

There are other things you’ll need to consider too, such as the style of the opener. Chain drive openers, for example, will be cheaper but noisier. A belt or screw drive will cost more, but be much quieter.

These days, you also have the option of picking a WiFi-enabled garage door opener, which gives you a lot more benefits too. For example, you can control the garage door with an app on your phone, no matter where you are in the world. Some even come with the ability to schedule Amazon Prime deliveries, which is really helpful if you’re at work when they arrive.

If you’re replacing your garage door opener, you’ll need to use a model with a battery backup as required by law. These will help you keep you safe in an emergency, and offer you other benefits too. Talk to your garage door fitter about what you can have fitted in your garage.

I recommend them highly

YGDG owner Brent, who is very personable and easy to talk to, offered a straight forward deal at a competitive price. Adrian, the technician who came to install the door was highly skilled at his job. He installed the door rapidly with no wasted motions or hesitations. I recommend them highly.

Cyrus M.
We use cookies on our website to give you the most relevant experience by remembering your preferences and repeat visits. By clicking “Accept”, you consent to the use of ALL the cookies.
Cookie settingsACCEPT
Manage consent