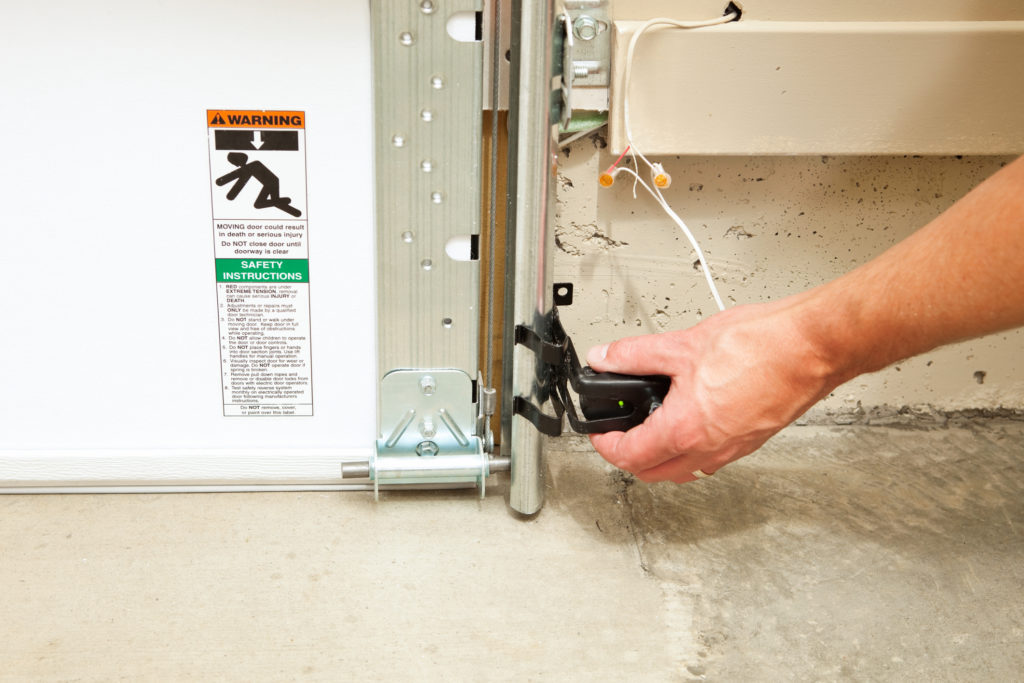 Your garage door safety sensors are one of the most essential parts of your garage door system. They’re designed to protect anyone using the door and ensure that a door won’t shut on them when they’re using it. If you’re having problems with it, you’ll need to know what’s causing the issue to fix it. Here’s what will commonly cause a safety sensor to start malfunctioning.

The Role of Your Garage Door Safety Sensors

Firstly, you’ll need to know just what it is that your garage door safety sensor does. In the past, the garage door would be opened and closed at the touch of a button, but they would do this regardless of whether anything was in the door’s path. That could lead to damage to your door or car, or even worse, injury for anyone using the door who was under it at the time.

This is now avoided with safety sensors. Your safety sensors will be two photoelectric eyes on either side of the garage door frame, near the ground. These two eyes shoot an invisible beam of light between them. The system is set up so that if that beam is broken, the garage door opener knows that something is in the way of the door.

Modern safety sensors are designed to avoid anything being caught under the door. When you have them installed, they’ll detect whether anything is in the garage door’s path as you close it. This will stop the garage door and make it auto reverse, so it won’t close on whatever is in the way. It’s a safety feature that should be included with any garage door opener on the market.

What to Do if You Encounter Issues

Most of the time, your garage door opener should work as intended, and the sensor should stop the door from closing on anything in the way. However, the sensors can have issues like any part of your garage door. Most of the time, the issue will be that they’re sensing something in the way when there’s nothing there. That will lead to the door auto reversing even when you don’t need it.

This will be problematic because while you’re waiting to fix the issue, you’ll need to shut the garage door. You won’t be able to leave it open, as that will be a security risk. Pull the red safety cord on your garage door opener to close the door, which will disconnect it from the door. Then, you’ll be able to close the door and lock it manually.

There could be a few different reasons why your garage door safety sensors aren’t working as they should. The good news is that some of the reasons are very simple to diagnose and rectify.

How to Fix Your Garage Door Safety Sensors

Now that you’ve identified an issue with your garage door safety sensors, you’ll need to correct it as soon as possible. A lot of the time, you’ll be able to do this yourself. The first thing to do is check that nothing is sitting in the way of the sensors. Remove any items near your sensors, and try to shut the door with the garage door opener again. If it still won’t shut, you’ll need to move on to the next step.

Get a dry, clean cloth and clean both photo eyes off. In many cases, that will be enough to solve the problem. If the door still doesn’t close, move on to the next step. Tie a string length between the sensors, and use a level to check if it’s level. If it isn’t, that shows you that the sensors are out of alignment. You’ll need to loosen the sensors on their brackets and move them until they’re both in alignment.

If none of the above steps have worked, you’ll need to call a garage door expert to help you. The wiring has likely become faulty in some way, so they’ll be able to diagnose and solve the problem for you. Now you know how a garage door safety sensor can break and how to identify what’s causing the problem. Follow these tips, and you’ll be able to solve the issue if you ever experience it.

I recommend them highly

YGDG owner Brent, who is very personable and easy to talk to, offered a straight forward deal at a competitive price. Adrian, the technician who came to install the door was highly skilled at his job. He installed the door rapidly with no wasted motions or hesitations. I recommend them highly.

Cyrus M.
We use cookies on our website to give you the most relevant experience by remembering your preferences and repeat visits. By clicking “Accept”, you consent to the use of ALL the cookies.
Cookie settingsACCEPT
Manage consent